Irrfan Khan’s son Babil reveals actor had strange understanding of rain: ‘Oh my god, what the rain did to him’ 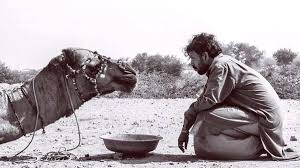 Late actor Irrfan Khan’s elder son Babil has shared a monochrome picture of his father and revealed how the actor had a strange understanding of rain. He says Irrfan’s connection with rains couldn’t be explained in words.

Sharing the picture of Irrfan feeding a camel, Babil wrote, “He had this strange understanding of rain. I cannot compare it to anything that I have ever experienced. He could only explain it to me through the limits within what words would let him, but there was a connection that I cannot envelop even in the most beautiful language; only the desert could show, oh my god, what the rain did to him.”

Irrfan’s fans were delighted to know a different side of the late actor. A fan wrote, “With every falling drop of rain, we can feel an essence of him Babil. He is around us, His presence can be felt throught rain.” Another commented, “Fairly understandable Babil. The rain was perhaps the purest form of emotions he soaked in….these hold true like you said…can’t be explained but this picture is so full of him to last a lifetime. Shukriya Irrfan Miya…Mulawaat ye bhi baaki rahi..wo baat alag hai zamin na sahi (we are yet to meet, if not on land).”

Irrfan died on April 29 after a two-year battle with a rare disease called neuroendocrine tumour. He was 54. He is survived by his wife Sutapa and sons Babil and Ayaan. The actor, who died at the Kokilaben Dhirubhai Ambani Hospital, was buried at the Versova graveyard the same day in the presence of his family and friends such as directors Tigmanshu Dhulia and Vishal Bhardwaj. The numbers were restricted in view of the nationwide lockdown.

The Rajasthan-born actor, who was diagnosed with neuroendocrine tumour in 2018, a rare form of cancer, was surrounded by his loved ones in his last moments. News of the death of the actor was confirmed by his family in a statement. “I trust, I have surrendered,” the family recalled him as saying when he was diagnosed with the disease.

This was the second tragedy for the family in less than a week. The Maqbool had actor lost his mother, 95-year-old Saeeda Begum, in Jaipur just four days ago and could not attend the funeral because of the lockdown.