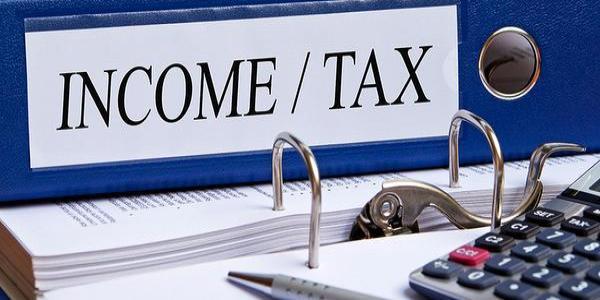 Companies often offer the option of filing medical, conveyance and telephone bills to their employees, to claim income tax deduction. However, a significant majority of employees opt out of it thinking that this will increase their-in-hand salary, a survey found. The survey by data measurement company Nielsen and fintech startup Zeta stressed on the need to make employees aware of the income tax benefits that these reimbursement claims offer. A total of 56 six per cent of employees who opt out of reimbursements do so for a higher in-hand salary, according to the findings of the survey. 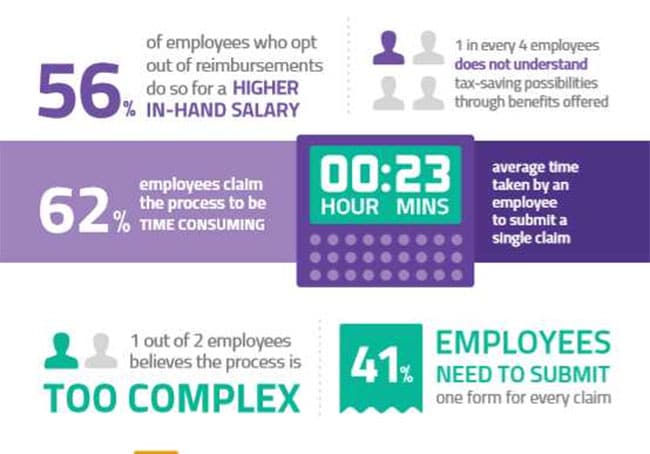 “Because reimbursements are first deducted from salary (before being credited upon bill-verification) there’s a sense of loss employees perceive. Those who have opted out of employee benefits thinking they’ll get a higher in-hand salary are therefore foregoing an actual profit in the future for a notional benefit in the present,” the Zeta-Nileson report stated.

Most popularly, medical reimbursements, telephone/internet and fuel reimbursements have been offered in companies as tax-saving benefits to employees. Leave travel allowance (LTA) and a gadget or asset allowance are also offered frequently in many companies, although these are sometimes reserved for higher-salaried or senior employees. Medical reimbursements has traditionally been the most sought-after benefit, but that will now undergo a big change, as standard deduction of Rs. 40,000 will be introduced with effect from financial year 2018-19. 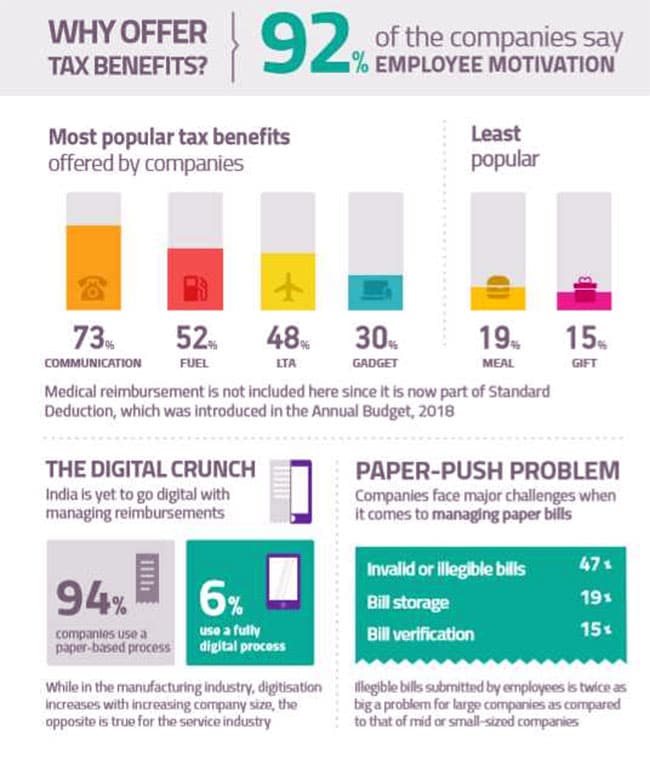 Contrary to belief, not many companies prefer to provide meal vouchers, according to the report. Gift vouchers are the least popular employee tax benefit of all, it noted.

Digital filings for reimbursements
The research insisted that the process for filing reimbursement claims needs to be simplified. The survey found that 62 per cent of employees claim that the reimbursement process is time-consuming and 23 minutes is the average time taken by an employee to submit a single claim.

Employees lose productive time in submitting these reimbursements claims. According to the survey, 90 per cent of them prefer digital reimbursements. This is in stark contrast to the fact that only 6 per cent of all companies surveyed provide it. Managing physical/paper bills, especially illegible and invalid ones, can cause major delays in the process. Stalled verification can cause undue anxiety to employees, who have no efficient way of tracking their claims. Many companies take more than eight days to process each claim, with some taking upwards of two weeks.

“Make the process transparent, make it easy, and make it relevant. That’s when employees are encouraged to opt in for something, and value it,” stated the report.

A total of 1,233 employees were interviewed in the Nielson-Zeta survey. About 568 of them were from the manufacturing sector and 665 from the services sector. Full-time employees of companies, who have worked in the company for at least two years and are eligible to receive tax-saving reimbursements, were interviewed.  A total of 194 companies were covered in the survey. Out of this, 92 companies were from the manufacturing sector and 102 are from the service sector. The research was conducted by Nielsen during August 2017 – February 2018.  HR/finance/admin personnel who are key decision-makers in deciding reimbursement policies or are responsible for processing employee reimbursements, were also a part of the survey.