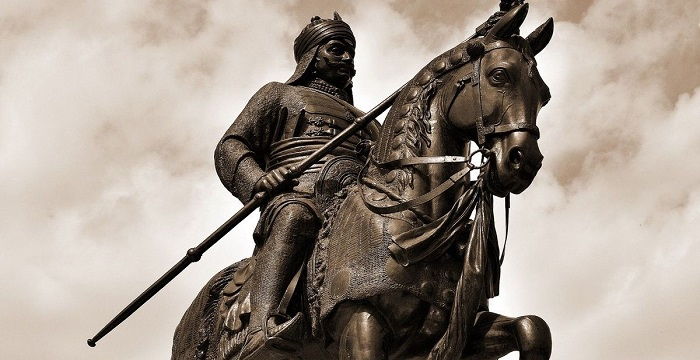 Maharana Pratap was a renowned Rajput warrior and a king of Mewar, Rajasthan, in north-western India. One of the greatest Rajput warriors, he is recognised for resisting the attempts of the Mughal ruler Akbar to conquer his territory. Unlike the other neighbouring Rajput rulers, Maharana Pratap repeatedly refused to submit to the mighty Mughals and continued fighting courageously till his last breath. A symbol of Rajput gallantry, diligence and valour, he was the only Rajput warrior to take on the might of Akbar, the Mughal Emperor. For all his courage, sacrifice and fiercely independent spirit, he is honoured as a hero in Rajasthan.

Maharana Pratap was born on May 9, 1540, in Kumbhalgarh Fort to Jaiwanta Bai and Udai Singh II. He had three younger brothers and two stepsisters. His father, Udai Singh II, was the king of Mewar and his capital was Chittor.

In 1567, the Mughal forces surrounded Mewar’s capital, Chittor. Instead of fighting with the Mughal forces, Udai Singh left the capital and shifted his family to Gogunda. Though Pratap resisted this decision and insisted on staying back, but the elders were able to convince him that leaving the place was the right decision. A temporary government of the kingdom of Mewar was set by up by Udai Singh and his courtiers in Gogunda.

In 1572, after the demise of Udai Singh, Rani Dheer Bai insisted that Uday Singh’s eldest son, Jagmal, should be crowned as the king, but the senior courtiers felt that Pratap was a better choice to handle the prevailing situation. This is how Pratap succeeded his father to the throne.

When Pratap succeeded his father to the throne, his brother Jagmal Singh, who was nominated as the Crown Prince by Udai Singh swore revenge and joined the Mughal army. The Mughal king Akbar rewarded him with the town of Jahazpur for the help he rendered.

When the Rajputs left Chittor, Mughals took control of the place, but their attempts to annex the kingdom of Mewar remained unsuccessful. A number of envoys were sent by Akbar tried to negotiate with Pratap to strike an alliance, but that did not work. Six diplomatic missions were sent by Akbar in 1573 but were turned down by Maharana Pratap. The last of these missions was lead by Akbar’s brother-in-law Raja Man Singh. When the efforts of signing a peace treaty failed, Akbar made up his mind to face the mighty Mughal army.

The Battle of Haldighati

On June 18, 1576, the Rajput army stood face-to-face with the Mughal army (under the command of Asaf Khan I and Man Singh) at Haldighati. According to historians, it was one of the fiercest battles ever fought, with the Mughal forces outnumbering the Rajput army. The army of Mewar was under the command of Ram Shah Tanwar and his sons namely, Chandrasenji Rathore, Rawat Krishnadasji Chundawaat and Maan Singhji Jhala.

The battle lasted for four hours and resulted in huge loss of lives on the Mewar side (approximately 1600 soldiers), while the Mughals lost only 150 soldiers and 350 wounded. Maharana Pratap was badly wounded but escaped to the nearby hills. Though Mughals were able to claim several parts of Mewar, including Gogunda and the nearby areas except some regions of Aravellis, but they were unable to oust Maharana Pratap who continued to harass the Mughals through guerrilla tactics.
The moment Akbar’s focus shifted to other places, Pratap along with his army who came out of the hiding and successfully regained the control of western regions of his province.

In the wake of Mirza Hakim’s incursion into Punjab and rebellions in Bihar and Bengal, Akbar diverted his attention to deal with these problems. I resulted into slackening of Mughal pressure on Mewar. In 1582, the Mughal post at Dewair was attacked and occupied by Maharana Pratap. Akbar moved to Lahore in 1585 and stayed there to keep an eye on the situation in the north-west for next twelve years. During this period no Mughal expedition was sent to Mewar. Pratap took advantage of this situation and regained control over western Mewar, including Gogunda, Kumbhalgarh and Udaipur. He built a new capital at Chavand, near Dungarpur.

The great warrior left for the heavenly abode on 29th January, 1597, at the age of 56, as a result of injuries sustained during his incessant struggle against the Mughal Empire. His eldest son, Amar Singh I, succeeded him to the throne of Mewar.

Maharana Pratap had eleven wives, five daughters, and seventeen sons. However, his favourite wife was his first wife named Maharani Ajabde Punwar. He tied the knot for the first time in 1557. In 1559, his first son Amar Singh I, who later succeeded him, was born.

It is said that Pratap married ten more princesses in order to strengthen the Rajput unity. Pratap spent a large part of his life and forests and it is also said that there was a time when his family had to survive on chappatis made of grass.

Maharana Pratap is often considered to be ‘India’s first freedom fighter,’ as he did not surrender to the Mughal armies led by Akbar. A number of television shows have been made on the life and achievements of Maharana Pratap.

A historic site dedicated to Maharana Pratap, Maharana Pratap Memorial, is situated at the top of Moti Magri, Pearl Hill in Udaipur. It was built by Maharana Bhagwat Singh Mewar and showcases a life-sized bronze statue of the gallant warrior riding his horse ‘Chetak.’

1. Maharana Pratap was seven feet and five inches tall and weighed 110 kgs.
2. The weight of the armour of his chest was 72 kgs and his spear weighed 81 kgs.
3. The total weight of Maharana Pratap’s shield, spear, two swords and armour was around 208kgs.
4. He had eleven wives, five daughters and seventeen sons. The names of his wives are Ajabde Punwar, Rani Lakhabai, Rani Champabai Jhati, Rani Shahmatibai Hada, Rani Ratnawatibai Parmar, Rani Solankhinipur Bai, Rani Amarbai Rathore, Rani Phool Bai Rathore, Rani Alamdebai Chauhan, Rani Jasobai Chauhan, and Rani Khichar Ashabai.
5. Maharana Pratap and his family had to live in the forest for a long time and they survived on chapattis made of grass. One day a wild cat snatched a grass roti from the hands of Maharana’s daughter, it was then he decided to surrender before Akbar. He wrote a letter to Akbar expressing his submission plans and Akbar happily passed the letter to Prithviraj who was a poet and Rajput warrior and was working under Akbar. Prithviraj wrote back to Maharana in a manner that gave confidence and strength to Pratap to face Akbar.
6. He was known for upholding the dignity of women. On one occasion, his son Amar Singh brought women from enemy camp as trophy hostages along with a Mughal officer, but Maharana Pratap rebuked this act and commanded to escort the ladies back to the camp. It is said that Abdur Rahim Khan-e-Khana was preparing to assault Pratap around the same time, but when he heard about this incident he immediately called off his plans and withdrew his forces.
7. Maharana Pratap and his forces were continuously in war with the Mughals which lead to financial crises and he was left with no money to support his forces. It was then that Bhama Shah, Maharana Pratap’s minister, financially aided Pratap with which he was able to support and sustain his army for next twelve years.
8. Maharana Pratap was very efficient in using guerrilla warfare tactics.
9. He had a very faithful horse named Chetak, who was also Maharana’s favourite. Chetak became immortal in an effort to save Rana Pratap in the Battle of Haldighati.
10. Rana Pratap spent a major part of his life, especially his childhood in the forest of Aravallis. Pratap was called Keeka by the tribals; he is also revered as Rana Keeka.
11. It is a well-known fact that Pratap loved his horse Chetak, but very few know that Chetak had blue eyes. It is because of this that Maharana Pratap was also revered to as ‘Rider of the Blue Horse.’
12. Besides Chetak, there was another animal that was very dear to Maharana – an elephant named Ramprasad. Ramprasad killed and injured a number of horses, elephants and soldiers during the Battle of Haldighati. Raja Mansingh is said to have deployed seven elephants to capture Ramprasad.